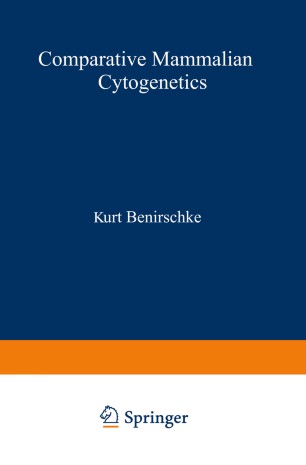 Ten years ago a symposium on Cytotaxonomy 'was held in London (Proc. Linn. Soc. Lond. 169:110, 1958) in which a first attempt was made to bring together various disciplines to discuss advances of mammalian cytogenetics and to put them into proper context with the sciences of evolution and taxonomy. The introductory remarks by \V. B. Turrill to that symposium, essentially an admonishment to be tolerant of the short­ comings of our respective disciplines, would be a most appropriate begin­ ning to this conference as ,,'ell. However, the meeting held at Hanover was conceived more along the lines of remarks made by R. B. Seymour Se,,'ell in his presidential address to the same society: "It has been said that scientists in this search for truth are nowadays too much concerned with the accumulation of facts, and make too little use of their imagina­ tion in their attempts to explain such facts as they have accumulated. " (In "The continental drift theory and the distribution of the Copepoda," ibid. 166:149, 1956. ) \\Tith this as a background, two years ago we held the first of a series of loosely-structured conferences on reproductive failure in the relaxing atmosphere of this small New England college community. The manu­ scripts of that meeting have been published (Comparative Aspects of Re­ productive Failure, Springer-Verlag New York Inc. , 1967).