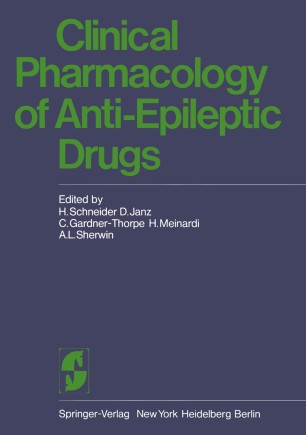 "He who is faithfully analysing ... epi­ lepsy is doing far more than studying epilepsy" Hughlings Jackson Modifying this well-known statement by Jackson, one could say today: "He who is faithfully analysing anti-epileptic drugs is doing far more than studying anti-epileptic drugs". For these drugs not only serve to prevent epileptic fits and thus advance the treatment of epilepsy, they are also effective in the treatment of cardiac arrhythmias and trigeminal neuralgia. Furthermore, clinical pharmacologists consider anti-epi­ leptic drugs as model drugs in pharmacokinetics and pharmocodynamics, since reliable methods are available for their determination and their effects and side­ effects can be defined. The methods of estimating of drugs in body fluids provide a tool that enables us to throw light on many obscure relationships in pharmaceutical treatment. Now that we can study the pharmacokinetics and interaction of drugs in man, many hypotheses based on clinical experience alone may well be eliminated or corroborated. The grow­ ing body of knowledge will make us more careful about the administration of drugs in combination. Now that we can study how biological parameters interfere with drug action, we may perhaps proceed to the scientific analysis of many clinical observations that suggest the importance of such factors as age, sex, menstrual cycle, pregnancy, fever, diet, stress, sport, climate, and altitude.