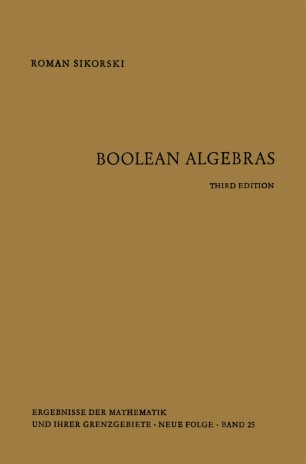 There are two aspects to the theory of Boolean algebras; the algebraic and the set-theoretical. A Boolean algebra can be considered as a special kind of algebraic ring, or as a generalization of the set-theoretical notion of a field of sets. Fundamental theorems in both of these directions are due to M. H. STONE, whose papers have opened a new era in the develop­ ment of this theory. This work treats the set-theoretical aspect, with little mention being made of the algebraic one. The book is composed of two chapters and an appendix. Chapter I is devoted to the study of Boolean algebras from the point of view of finite Boolean operations only; a greater part of its contents can be found in the books of BIRKHOFF [2J and HERMES [1]. Chapter II seems to be the first systematic study of Boolean algebras with infinite Boolean operations. To understand Chapters I and II it suffices only to know fundamental notions from general set theory and set-theoretical topology. No know­ ledge of lattice theory or of abstract algebra is presumed. Less familiar topological theorems are recalled, and only a few examples use more advanced topological means; but these may be omitted. All theorems in both chapters are given with full proofs.