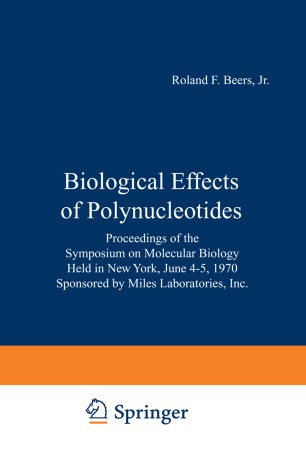 In recent years our horizons regarding the role of nucleic acids in biological systems have been expanded vastly by the finding that these molecules not only carry and transmit specific infOImation but also can act as less specific triggers of antiviral factors and of immunological responses. The latter properties are of particular interest in terms of possible utilization in human and veterinary medicine and consequently led, in the last few years, to the development of a new research area that combines both fundamental and applied problems in a uniquely attractive way. Furthermore, the importance and the complexity of the problems has attracted investigators from many fields, including molecular biologists, virologists, immunologists, chemists, biophysicists, oncologists, pharmacologists, and clinicians. A discussion of new developments in this area of biological effects of polynucleotides, with particular emphasis on interferon induction and modification of immune responses, therefore, seemed a logical topic for one of the annual symposia that Miles Laboratories, Inc. , has sponsored in recent years. The manage­ ment of Miles accepted the suggestion with enthusiasm and thus once again earned the gratitude of the scientific community for sponsoring a catalytic meeting that was principally concerned with basic research problems and only tangentially with immediate applications. Springer-Verlag agreed to publish the proceedings of the meeting which was held at the Americana Hotel in New York City, June 4-5, 1970 and attracted an unusually large audience.