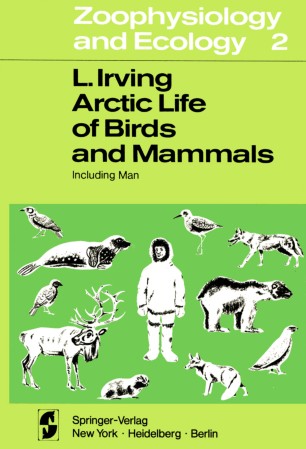 Arctic Life of Birds and Mammals

Part of the Zoophysiology and Ecology book series (ZOOPHYSIOLOGY, volume 2)

After travel through Alaska during the Second World War, in 1947 I went to Barrow with a very lively group of biologists. From their productive research developed the Arctic Research Laboratory. While we examined the rather surpris­ ingly modest metabolic rates of arctic warmblooded animals in cold, PER SCHO­ LANDER proposed and then carried out measurements of metabolism of some tropi­ cal animals in Panama. The differences could be formulated to show the basis of adaptation to arctic cold and to tropical warmth. Imagination and logic were required to formulate the comparison so that it could become a part of science, but the essential measurements were derived from animals and plants in their own arctic and tropical environments. Characteristics that adapt the forms of life to climatic conditions of various environments appear clear in the large dimensions of extremely differing climates. At the time of my arrival in Alaska many of the arctic Eskimos were still largely dependent on natural resources of their immediate and local environment, in which great seasonal changes in temperature and solar radiation appeared as dominant factors. The living environment on which they subsisted was also mar­ kedly affected by the changes of the seasons, in particular by the change in state of water to ice that terminated summer and by the melting that brought the late transition from winter to summer.