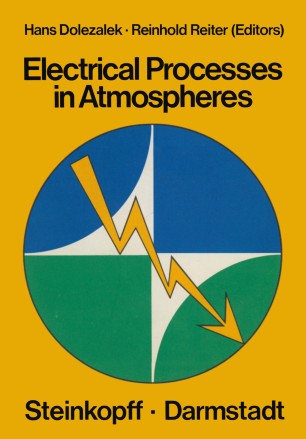 These Proceedings are published to give a full account of the Fifth International Conference on Atmospheric Electricity held in September 1974 in Garmisch-Partenkirchen in the Bavarian Alps in Germany. Traditionally, the Proceedings of these Conferences have served as reference books updating the textbooks and monographs on Atmospheric Electricity. As treated by these Conferences, Atmos­ pheric Electricity covers all aspects of this science, including the processes and problems which reach out into the Earth's environment as well as analogous processes on other planets and on the Moon. A history of these Conferences, an account of their purpose, and an outline of the scope and the preparation is to be found at the end of these Proceedings. There, also the Business Meetings of the involved organizations are mentioned. The Proceedings closely follow the original program and are accordingly organized into "Sessions". The papers printed in each "Session" in this book are the ones which were accepted for the sessions of the Conference with the same numbers and titles. Only the two "Special Sessions" have been given different numbers in the Proceedings, i.e. 2a and 10. In principle, all papers which were accepted by the Executive Panel either for full oral presentation or for printing in the Proceedings only, have in fact been included in these Proceedings, whether they were presented or not. In the latter case, a special note is made to explain the absence of a discussion.