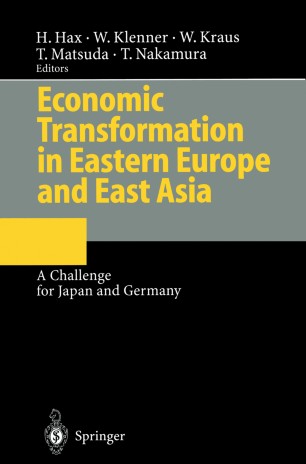 A Challenge for Japan and Germany

The economic transfonnation taking place in Eastern Europe and Asia is in particular a challenge for Japan and Gennany, because these two states as the immediate neighbors of the developing regions are directly affected and also because they are the strongest economic powers in their regions and have the necessary potential to influence developments there. Japan and Gennany are affected in many ways, both positively and negatively. Should the economic and social transformation run into difficulties, leading to economic and political chaos, perhaps even to armed conflicts, then economy and social fabric of the prosperous neighbors would doubtlessly suffer. In the past, Japan and the South-East Asian region have already experienced how economic problems in China caused millions of Chinese to seek their fortunes in other countries. An economic and political destabilization of China would today probably have even greater effects on migration flows. Similar effects can be expected in Europe, if the transfonnation process in Eastern Europe should fail. But even less dramatic developments in Eastern Europe and East Asia can have deleterious consequences for Gennany and Japan. Both nations are linked closely to the transfonning economies near them, though at a fairly low level. A reduction in trade with them, a refusal to service debts and other economic frictions ensuing out of economic and political troubles would of necessity hamper the prosperity of Japan and Gennany. A successful transfonnation process would without doubt benefit all economic partners to a considerable extent.