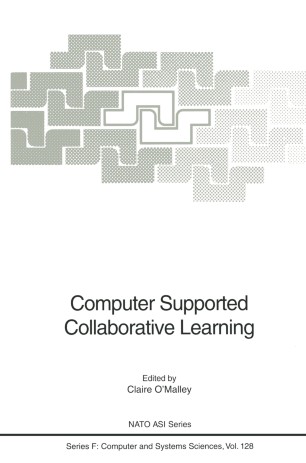 Although research in collaborative learning has a fairly long history, dating back at least to the early work of Piaget and Vygotsky, it is only recently that workers have begun to apply some of its findings to the design of computer based learning systems. The early generation of the!le systems focused on their potential for supporting individual learning: learning could be self­ paced; teaching could be adapted to individual learners' needs. This was certainly the promise of the later generation of intelligent tutoring systems. However, this promise has yet to be realised. Not only are there still some very difficult research problems to solve in providing adaptive learning systems, but there are also some very real practical constraints on the widespread take up of individualised computer based instruction. Reseachers soon began to realise that the organisational, cultural and social contexts of the classroom have to be taken into account in designing systems to promote effective learning. Much of the work that goes on in classrooms is collaborative, whether by design or not. Teachers also need to be able to adapt the technology to their varying needs. Developments in technology, such as networking, have also contributed to changes in the way in which computers may be envisaged to support learning. In September 1989, a group of researchers met in Maratea, Italy, for a NATO-sponsored workshop on "Computer supported collaborative . learning". A total of 20 researchers from Europe (Belgium.