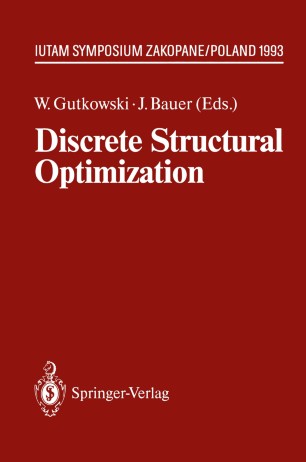 The IUTAM Symposium on "Discrete Structural Optimization" was devoted to discuss optimization problems for which design va­ riables may not be sought among continuous sets. Optimum sizing from lists of available profiles, segmentation; as well as allocation and number of supports, sensors or actuators, are good exam­ ples of such problems for which design variables may be chosen only from finite sets. The above problems are having not only important practical applications. They are also inspiring scienti­ fic research in the field of discrete applied mathematics. Among them are controlled enumeration methods, subgradient approach, genetic programming, multicriteria optimization, neural nets etc. Along with its tradition of promoting and supporting new im­ portant fields of research in mechanics and its application, General Assembly of IUTAM decided in 1990 to support the Sumposium. It is worthy to note that this is the second IUTAM Symposium on structural optimization, organized in Poland. The first one was held in Warsaw twenty years ago and was organized by Profe­ ssors Sawczuk and Mroz. It was devoted mostly to problems with continuous design variables. The Symposium which gathered 40 participants from 12 coun­ tries was sponsored by several institutions listed below. However support by IUTAM should be specially appreciated. It helped se­ veral scientists to contribute to the Symposium which other way wouldn't attend the meeting.