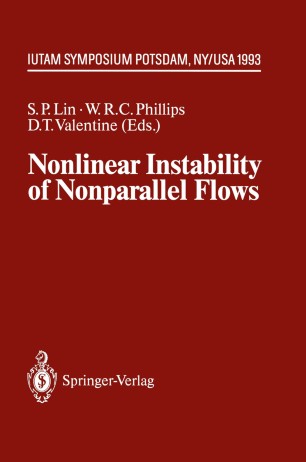 The IUTAM Symposium on Nonlinear Instability of Nonparallel Flows was held at Clarkson University, Potsdam, NY 13699-5725, USA from 26 to 31 July 1993. It consisted of 9 general speeches, 35 lectures and 15 poster-seminar presentations. The papers were grouped in fairly focused sessions on boundary layers, shear flows, vortices, wakes, nonlinear waves and jets. The symposium was fol­ lowed by a workshop in which the subject matter discussed was sum­ marized and some further work for future investigation was recom­ mended. The highlights of the workshop will be reported elsewhere. In this book many of the papers that describe the ideas presented at the symposium are collected to provide a reference for researchers in charting the future course of their studies in the area of nonlinear instability of nonparallel flows. The papers in this book are grouped under the following headings: • Boundary layers and shear flows • Compressibility and thermal effects • Vortices and wakes • Nonlinear waves and jets In the lead paper ofthis book M. E. Goldstein describes an asymp­ totic theory of nonlinear interaction between two spatially growing oblique waves on nonparallel boundary and free-shear layers. The wave interaction originates from the nonlinear critical layer and is responsive to weakly nonparallel effects. The theory results in a sys­ tem of integral differential equations which appear to be relevant near the upper branch of the neutral curve.