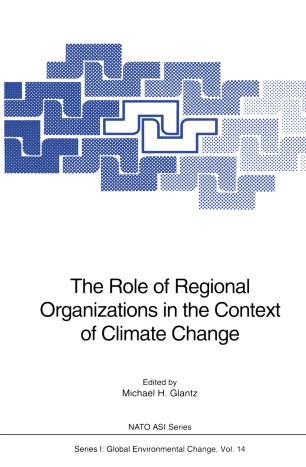 The Role of Regional Organizations in the Context of Climate Change

The past two decades have seen a remarkable broadening of interest in global warming from a research concern on the part of a limited number of scientists to a political problem on a worldwide scale. The nature of this transformation would itself be a fruitful study for a mixed team of social scientists and natural scientists. It would be valuable to assess the differing nature of the staging posts along this road: the First World Climate Conference in 1979, which was a meeting of scientists talking to scientists; the Villach Assessment of 1985, which was a meeting of scientists whose report was given attention by the policy advisers of a number of governments; the Second World Climate Conference of 1990, which consisted of a scientific meeting followed by a Ministerial Meeting; and the United Nations Framework Convention on Climate Change of 1992 signed by 158 countries at the UN Conference on Environment and Development in June 1992. The present publication is a welcome contribution of the followup to UNCED. By focusing on a specific problem, it avoids the pitfall of undue generalization and provides the basis for fruitful discussion between natural scientists, social scientists, and policymakers. To choose as the area of concentration a particular scale also helped to produce meaningful discussion likely to lead to action.