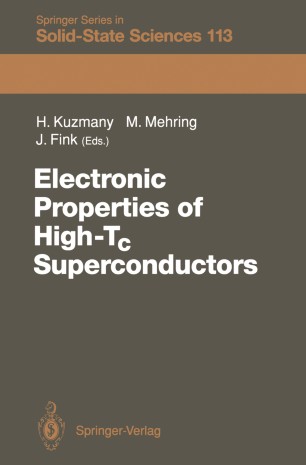 The Normal and the Superconducting State of High-Tc Materials

The International Winter School on Electronic Properties of High-Temperature Superconductors, held between March 7-14, 1992, in Kirchberg, (Tyrol) Austria, was the sixth in a series of meetings to be held at this venue. Four of the earlier meetings were dedicated to issues in the field of conducting polymers, while the winter school held in 1990 was devoted to the new discipline of high-T c superconductivity. This year's meeting constituted a forum not only for the large number of scientists engaged in high-Tc research, but also for those involved in the new and exciting field of fullerenes. Many of the issues raised during the earlier winter schools on conducting polymers, and the last one on high-T c superconductivity, have taken on a new significance in the light of the discovery of superconducting C materials. 60 The Kirchberg meetings are organized in the style of a school where expe­ rienced scientists from universities, research laboratories and industry have the opportunity to discuss their most recent results, and where students and young scientists can learn about the present status of research and applications from some of the most eminent workers in their field. In common with the previous winter school on high-Tc superconductors, the of the cuprate superconductors. present one focused on the electronic properties In addition, consideration was given to related compounds which are relevant to the understanding of the electronic structure of the cuprates in the normal state, to other oxide superconductors and to fulleride superconductors.