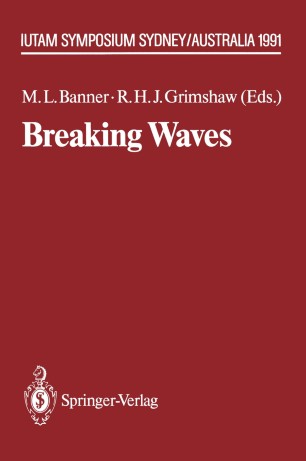 Wave breaking is a commonly occurring phenomena associated with wave motion in fluids, often inducing significant effects which are of fundamental and technological importance, A familiar illustration is provided with white-capping and microbreaking of the wind-driven ocean sUrface waves, which is believed to play an important part in the transfers of momentum, mass and heat across the air-sea interface, as well as in the production of underwater ambient noise and augmented microwave backscatter. The enhanced hydrodynamic forces associated with the breaking of the more energetic ocean wave components constitute a significant challenge in ocean engineering, coastal engineering and naval architecture. Other less conspicuous but equally important manifestations are the breaking of internal waves and the fila mentation of vorticity interfaces. Despite recent theoretical and observational progress towards a more complete understanding of wave breaking, mathematical descriptions of its onset and consequences are presently lacking. The aim of this Symposium was to bring together theoretical and observational expertise, with the goal of determining the current state of knowledge of wave breaking and providing a stimulus to future research. The Symposium focused on water waves of all scales from capillary waves to ocean swell, but also considered internal waves and the filamentation of vorticity interfaces. Specific topics included were: Fundamental theoretical studies; wave instabilities; routes to breaking. Models of wave breaking. Field observations, including statistical information. Laboratory studies. Shoaling waves, breaking waves on currents, breaking induced by the motion of a ship.