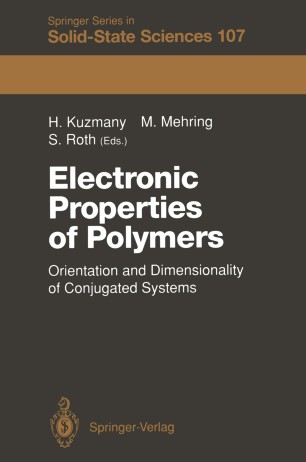 The International Winter School on Electronic Properties of Polymers Orien­ tation and Dimensionality of Conjugated Systems, held March 9-16, 1991, in Kirchberg, ('lYrol) Austria, was a sequel to three meetings on similar subjects held there. The 1991 winter school was again organized in cooperation with the "Bundesministerium fUr Wissenschaft und Forschung" in Austria, and with the "Bundesministerium fUr Forschung und Technologie" in the Federal Republic of Germany. The basic idea of the meeting was to provide an opportunity for experienced scientists from universities and industry to discuss their most re­ cent results and for students and young scientists to become familiar with the present status of research and applications in the field. Like the previous winter schools on polymers, this one concentrated on the electronic structure and potential~ for application of polymers with conjugated double bonds. This time, however, special attention was paid to the effects of orientation and dimensionality. Anisotropy of the electric conductivity in stretch-oriented samples and whether the transport mechanisms are one-, two-, or three-dimensional or might even have a "fractal dimensionality" were there­ fore central topics. The problem of orientation was extended to systems such as Langmuir-Blodgett films and other layered structures. Accordingly, thin films were the focus of most of the application oriented contributions. Whereas in the previous winter schools discussions on applications dealt with "large volume applications" such as electromagnetic shielding and energy storage, this time "molecular materials for electronics" and prospects of "molecular electronics" were at the center of interest.