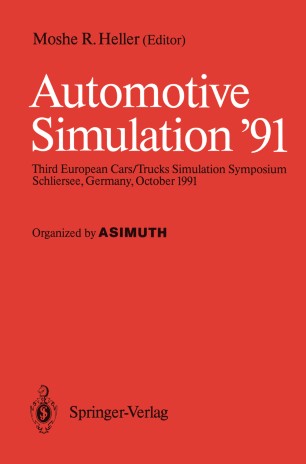 Welcome to Bavaria - Germany - to the THIRD EUROPEAN CARS/TRUCKS SIMULATION SYMPOSIUM. That Schliersee traditional workshop-type meeting is a follow-up to the first and the second symposia which took place in May 1984 and May 1989 respectively. The objective of gathering together is to cover most of the aspects of Automotive Mathematical Modelling and Simulation in theory and practice to promote the exchange of knowledge and experience between different national and international research groups in that field, taking into consideration that every seventh German employee is related to the automotive industry. This effect is also in power at least with the traditional Detroit (U.S.A.) Automotive Industries and the growing up Japanease as well. Futhermore, there is to strenghten the international contact between developers and users of modelling and simulation techniques considering the "new world order" started in 1991 with no borders between West and East affected by the Golf-War and followed up by the "open" European Community borders of 1992. VI The traditional International Conference jointly promoted by ASIMUTH - Applied Simulation Technology and some other members of the Society of Computer Simulaton created an interest to publish new projects including their results. A large number of contributed papers has been strictly examined and selected by the editorial commitee to guarantee a high international technical standard.