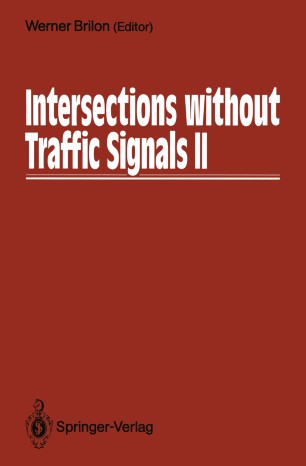 Proceedings of an International Workshop, 18–19 July, 1991 in Bochum, Germany

In March 1988, an international workshop on intersections without traffic signals was held at the Ruhr-University in Bochum, Germany. The proceedings of this workshop were published by Springer 1). The workshop was performed in a very harmonious atmosphere, which stimulated the experts from different countries to communicate and exchange their ideas and experiences. The presentations and the written contributions documented the present state of technical solutions for design and engineering of unsi­ gnalized intersections both regarding scientific research and practical applications. Moreover, numerous unsolved problems were identified. Thus, the 1988 workshop stimulated new developments in the field of unsignalized inter­ sections in several countries. In the meantime, these investigations have lead to a remarkable progress. For example in Germany a new guideline for unsignalized cross intersections and T-junctions has been finished and is going to be introduced in 1991. New results on roundabout capacity have been worked out as well. Many particularly important developments were made in foreign countries. Especially in the United States, an increasing interest in this subject can be observed. In the annual meetings of the TRB, this item received great attention. Many research institutes in North America have concentrated their activities on that point. A new TRB-circular concerning unsignalized intersections is going to be published. It will contain a new procedure for four-way-stop-control intersections, which seems to be a special feature of North American traffic engineering. However, new results from the US for two-way-stop­ control intersections are available as well.