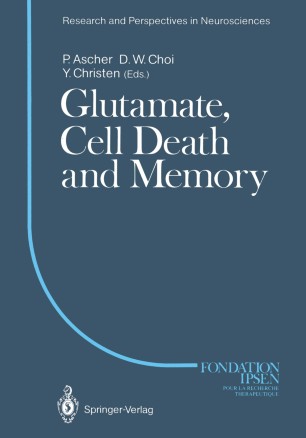 Part of the Research and Perspectives in Neurosciences book series (NEUROSCIENCE)

In the past few years, the Fondation IPSEN has been increasing its activity in the neurosciences, especially by supporting researchers working on Alzheimer's disease. This interest in the subject is demonstrated by a prize and a fellowship, which have been awarded each year since 1985, a monthly newsletter, and a series of Colloques Medecine et Recherche and their proceedings which are distributed world-wide. Since 1990, our effort in the field of neuroscience has been considerably enhanced. A new series of Colloques Medecine et Recherche has been devoted to this topic. Like the meetings on Alzheimer's disease, this series will deal with the most current research. Glutamate -the subject we chose for the first meeting of this series - is an excellent example since it has a major role in many physiological or pathological situations. This book contains the proceedings of the meeting which was held in Paris on September 24, 1990. As for the proceedings of the meeting on Alzheimer's disease - published in the series Research and Perspectives in Alzheimer's disease -these meetings will be reported in a new series, distributed at an international level, Research and Perspectives in Neurosciences. The second meeting on neurosciences is scheduled for September 23, 1991, and will be held in Paris. It will be dedicated to Gene transfer and therapy in the nervous system (Organizing Committee: F. Gage, La Jolla; Y. Christen, Paris).