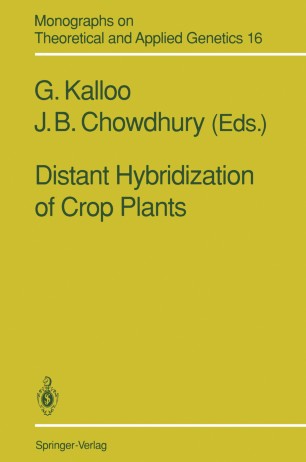 Part of the Monographs on Theoretical and Applied Genetics book series (GENETICS, volume 16)

Wild taxa are invaluable sources of resistance to diseases, insects/ pests, nematodes, temperature extremes, salinity and alkalinity stresses, and also of nutritional quality; adaptation; genetic diversity and new species. Utilization of wild relatives of a crop depends largely upon its crossability relations with cultivated varieties. Sev­ eral wild species are not crossable with the commercial cultivars due to various isolation barriers. Furthermore, in a few cases, hybridiza­ tion is possible only in one direction and reciprocal crosses are not successful, thus depriving the utilization of desired cytoplasm of many species. However, techniques have been developed to over­ come many barriers and hybrid plants are produced. New crop species have been developed by overcoming the F 1 sterility and producing amphidiploids and such crops are commercially being grown in the field. The segregation pattern ofF 1 hybrids produced by distant hybridization in segregating generations are different from the intervarietal hybrids. In former cases, generally, unidirectional segregation takes place in early generations and accordingly, selec­ tion procedures are adopted. In most of the cases, backcross or modified backcross methods have been followed to utilize wild species, and thus numerous types of resistance and other economical attributes have been transferred in the recurrent parents. Protoplast fusion has been amply demonstrated in a number of cases where sexual hybridization was not possible and, as a result, hybrids have been produced.