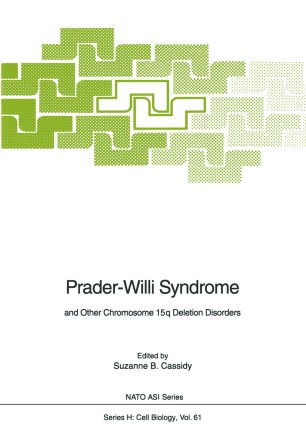 and Other Chromosome 15q Deletion Disorders

Although Prader-Willi syndrome was first described 35 years ago, it was following detection of an interstitial chromosome 15q deletion in some affected patients ten years ago that it became a major focus of multidisciplinary scientific interest. This interest was compounded by the later determination that some patients with a clinically distinct disorder, Angelman syndrome, apparently also had the same chromosome 15q deletion. Subsequently, molecular genetic studies showed that some cytogenetically normal patients with both disorders have uniparental disomy, maternal in Prader-Willi syndrome and paternal in Angelman syndrome. Genetic imprinting has been implicated in this unusual phenomenon. This Workshop was conceived to bring together clinical and basic scientists from around the world whose research was focused on unraveling this unique genetic situation and further delineating these two fascinating disorders. As this volume demonstrates, it was successful in reaching this goal. Laboratory and clinical scientists from 15 countries in four continents participated, and even more countries were represented among the professional and parent observers of its proceedings. Many participants had previously known each other in print only. As a consequence of the Workshop, conclusions could be drawn on several issues. International collaborative research efforts were established. And acquaintances were developed between people who investigate the genetics of these disorders from differing perspectives, resulting in enrichment of approach to answering the complex questions posed by these fascinating conditions. Plans were initiated for another such scientific workshop a few years hence. This volume includes papers presented from the platform.