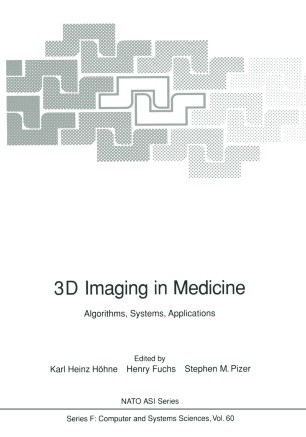 The visualization of human anatomy for diagnostic, therapeutic, and educational pur­ poses has long been a challenge for scientists and artists. In vivo medical imaging could not be introduced until the discovery of X-rays by Wilhelm Conrad ROntgen in 1895. With the early medical imaging techniques which are still in use today, the three-dimensional reality of the human body can only be visualized in two-dimensional projections or cross-sections. Recently, biomedical engineering and computer science have begun to offer the potential of producing natural three-dimensional views of the human anatomy of living subjects. For a broad application of such technology, many scientific and engineering problems still have to be solved. In order to stimulate progress, the NATO Advanced Research Workshop in Travemiinde, West Germany, from June 25 to 29 was organized. It brought together approximately 50 experts in 3D-medical imaging from allover the world. Among the list of topics image acquisition was addressed first, since its quality decisively influences the quality of the 3D-images. For 3D-image generation - in distinction to 2D­ imaging - a decision has to be made as to which objects contained in the data set are to be visualized. Therefore special emphasis was laid on methods of object definition. For the final visualization of the segmented objects a large variety of visualization algorithms have been proposed in the past. The meeting assessed these techniques.