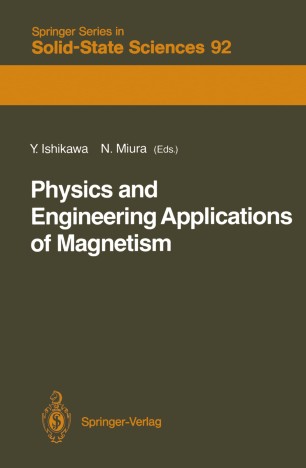 Physics and Engineering Applications of Magnetism

This book was originally published in Japanese in honour of Professor S. Chikazumi on the occasion of his retirement from the University of Tokyo in March 1982. Physicists who had been supervised by him or had closely col­ laborated with him wrote articles on recent developments in magnetism and its engineering applications. In the preface of his excellent textbook Physics of Magnetism (Wiley, 1964), Professor Chikazumi says that recent research in magnetism deals with fundamental physical problems and, at the same time, with more secondary magnetic phenomena, as well as with engineering applications of magnetic materials to electromagnetic machines, permanent magnets and electronic computers, and that the purpose of his textbook is to give a general view of these magnetic phenomena, focusing its main interest at the center of such a broad field. Always keeping such a viewpoint in mind, Professor Chikazumi has contributed a great deal to both fundamental physics and applications of magnetism. This is described in Chap. 1 of this book. Many books have been published on both the physics and applications of magnetism. However, no single book has a viewpoint covering both of them. The recent development of high technology needs such a broad viewpoint for scientists and engineers since it is a product of both fundamental science and technology. Research in magnetism is based on the response which materials show to the application of magnetic fields.