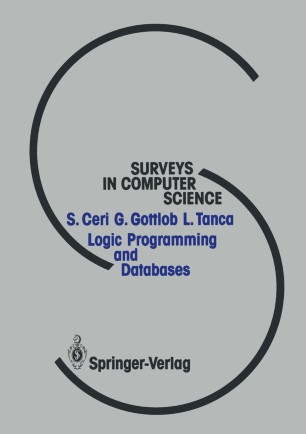 Part of the Surveys in Computer Science book series (SURVEYS)

The topic of logic programming and databases. has gained in­ creasing interest in recent years. Several events have marked the rapid evolution of this field: the selection, by the Japanese Fifth Generation Project, of Prolog and of the relational data model as the basis for the development of new machine archi­ tectures; the focusing of research in database theory on logic queries and on recursive query processing; and the pragmatic, application-oriented development of expert database systems and of knowledge-base systems. As a result, an enormous amount of work has been produced in the recent literature, coupled with the spontaneous growth of several advanced projects in this area. The goal of this book is to present a systematic overview of a rapidly evolving discipline, which is presently not described with the same approach in other books. We intend to introduce stu­ dents and researchers to this new discipline; thus we use a plain, tutorial style, and complement the description of algorithms with examples and exercises. We attempt to achieve a balance be­ tween theoretical foundations and technological issues; thus we present a careful introduction to the new language Datalog, but we also focus on the efficient interfacing of logic programming formalisms (such as Prolog and Datalog) with large databases.