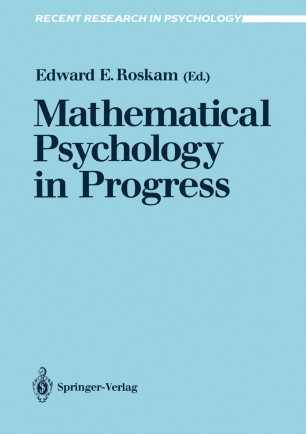 This volume is the third volume of papers originating from the European Mathematical Psychology Group. Earlier volumes were: E. Degreef & J. van Buggenhaut (Eds.), Trends In Mathematical Psychology, Amsterdam, North-Holland Publ. Cy., 1984, and E.E. Roskam & R. Suck (Eds.), Progress in Mathematical Psychology, Amsterdam: Elsevier Science Publ. As the title indicates, this volume presents work in progress, which was reported in one of the recent annual meetings of the European Mathematical Psychology Group. The Group finds it worthwhile to disseminate this work, using a review process which is somewhat less strict, and a publication lag which is shorter, than would be the case for standard international journals. The editor is happy that the meetings of the European Mathematical Psychology Group are regularly attended by colleagues from overseas. Their contributions also appear in this volume, as was the case in earlier volumes. Despite apparent heterogeneity, the reader will observe that European mathemati­ cal psychologists have a keen interest in basic issues of mathematical modeling and measurement theory, and that also substantive topics, such as decision making, per­ ception, and performance are studied in the context of formal modeling. Also, and per­ haps of more than casual importance for future developments, is the fact that theory, experiment, and data analysis go closely together. It should therefore not surprise that psychometric topics, and topics in scaling are represented in this volume, alongside with topics of a more 'purely' mathematical nature.