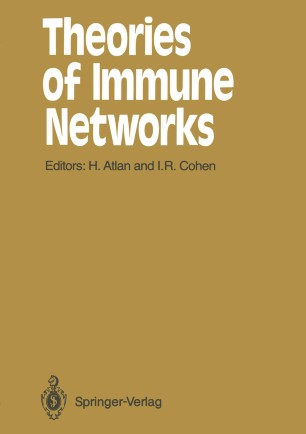 For a long time, immunology has been dominated by the idea of a simple linear cause-effect relationship between the exposure to an antigen and the production of specific antibodies against that antigen. Clonal selection was the name of the theory based on this idea and it has provided the main concepts to account for the known features of the immune response. More recently, immunologists have discovered a wealth of new facts, in the form of different regulatory cells (helpers, suppressors, antigen presenting cells), genetic determinations of immune responses such as those involved in graft re­ jections, different molecular structures responsible for intercellular interactions such as interleukins, cytokins, idiotype-antiidiotype recognition and others. While furthering our understanding of the local interactions (molecular and cellular) in­ volved in the immune response, these discoveries have led to a questioning of the simplicities of the classical clonal selection theory. It is clear today that every single immune response is a cooperative phenomenon involving several different molecular and cellular interactions taking place in a coupled manner. In addition, cross reactivity to different antigens has shown that responses of the whole im­ mune system to different antigens are not completely isolated from one another and that the history of encounters with different antigens plays a crucial role in the maturation of the whole system. Thus, problems of complexity, generation of di­ versity and self-organization have entered the field of immunology.