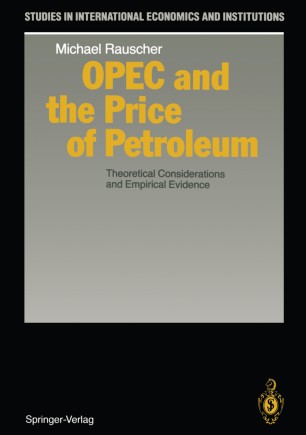 OPEC and the Price of Petroleum

Part of the Studies in International Economics and Institutions book series (INTERN.ECONOM.)

1. 1. Oil price fluctuations and their impact on economic performance Drastic oil price fluctuations have been a major characteristic of the world petroleum market since the beginning of the seventies. The oil crises of 1973n4 and 1979/80 were followed by a dramatic drop of the oil price during the first two quarters of 1986. Starting from a level less than 2 $ per barrel in 1972, the spot market price of Arabian Light crude oil increased to some 35 $ in 1980, then slowly decreased, and finally fell to 13 $ in 1986 (annual averages). If monthly data are considered, the peaks of the oil price movement look even more dramatic. In December 1980 Arabian crude was traded for more than 40 $ a barrel, and in August 1986 the price was down at 8 $ (see Fig. 1. 1). 40 30 20 10 r o 84 88 76 80 72 Figure 1. 1: The spot market price of Saudi-Arabian Light crude oil! ! Data are taken from the Petroleum Economist and the OPEC Bulletin, various issues. 2 After the Second World War petroleum has become the most important energy resource. During the fifties and sixties its price was relatively low compared to other energy 2 sources like coal and firewood and it tended to drive them out of the market.