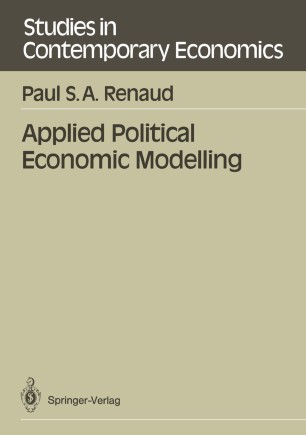 project was the development and application of a model of central and local government behavior. It was carried out in collaboration with the Dutch Department of Home Affairs, during the period September 1985 - April 1987. The project's aim was the study of the determinants of local government decisionmaking in the Netherlands and the implications of so-called intergovernmental relations for local government behavior. During that project I was assisted by Sander Helder and Marc Tigche1aar. The results of that project appeared in a book, co-authored by Frans van Winden, entitled Gemeentefinancien en Gedecentra1iseerde. Bes1uitvorming(Loca1 Public Finance and Decentralized Decisionmaking). This book is, for the time being, the end product of my research on government behavior. Much more research is needed on the study of government behavior and the application of models which, from an economic point of view, focus on the implications of the interaction between economics and politics. The knowledge of this process is not only interesting as such, but also from a practical point of view. without a good positive analysis of the behavior of the government in modern industrialized economies it is neither possible to see through its operations nor to use its policies as an effective instrument in the pursuit of economic targets.