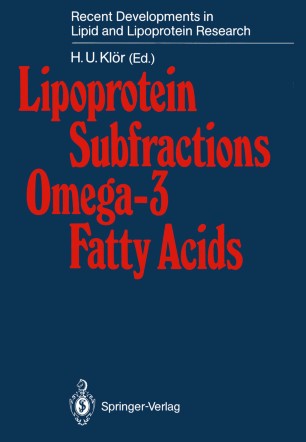 On November 6 and 7, 1987, lipid and lipoprotein researchers from all over Europe convened in Munich on the occasion of the second European Workshop on Lipid Metabolism (EWLM). This informal gathering was devoted to two main topics, and recent research results were presented and discussed during a poster session. Recent developments in the physiology and pathophysiology of lipoprotein sub­ fractions were discussed on the first day of the meeting. In recent years, new analytical tools have been created for analyzing lipoprotein subfractions, particularly the apolipoprotein component. With the, introduction of immunological and elec­ trophoretic methods it has become clear that the heterogeneity of the plasma lipopro­ tein system is even greater than had been assumed only a decade or so ago. Despite this, it is apparent from the contributions to this volume that new methods for differentiating lipoprotein subfractions will increase our understanding of lipoprotein metabolism, especially of the triglyceride-rich lipoprotein particles and the high­ density lipoproteins. The complex functions of the various plasma apolipoproteins and their association with the lipoprotein lipid in single or complex lipoprotein particles give rise to a complex and dynamic metabolic system that changes constantly during the day. While it has for some time been possible to delineate fairly accurately the atherogenic potential of low-density lipoproteins, which are comparatively simple lipoprotein particles, the new methods of lipoprotein subfraction analysis will be needed to select and differentiate amongst the potentially atherogenic triglyceride­ rich particles, especially the chylomicron and very low density lipoprotein remnants.