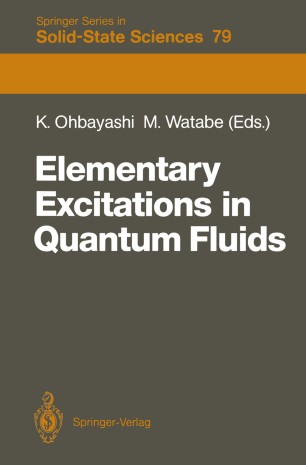 This volume is the proceedings of the Hiroshima Symposium on Elementary Excitations in Quantum Fluids, which was held on August 17 and 18, 1987, in Hiroshima, Japan, and was attended by thirty-two scientists from seven countries. Quantum fluids have been the subject of intense study as a consequence of their superfluid properties at very low temperatures. Elementary excitations in them are an important concept about which many important discoveries have been made in recent years. This symposium was arranged by a group of physicists from Hiroshima University to provide an opportunity to discuss these recent developments. It was conceived as a satellite conference of the 18th International Conference on Low Temperature Physics (LT 18), which was held in Kyoto, August 20-26, 1987. Emphasis was placed on the dynamic structures and correlations of ele­ mentary excitations, which resulted in invited speakers being selected from this field. However, enthusiastic contributors reported notable new results on various other aspects of the elementary excitations, which made the sympo­ sium lively and successful. It is our great satisfaction to present this volume, which includes papers of good quality and originality. We thank all the parti­ cipants for their cooperation throughout this symposium, and for preparing their manuscripts within a reasonable time.