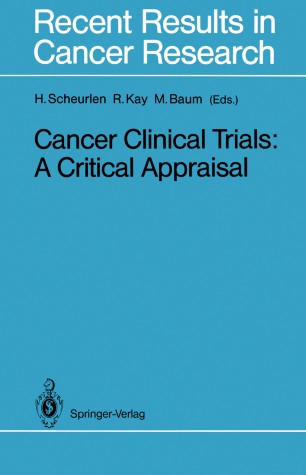 The controlled clinical trial has become an essential part of the clinician's decision-making process. Clinical trials, however, still raise methodological problems that are important and at the same time controversial: subgroup analysis and interactions, meta-analy­ sis of similar trials, consideration of subjective clinical opinions and those of the public at large, assessment of quality of life, pre­ vention trials, and so on. In February 1987 we took our third step along the road to evaluating these issues in dialogues between cli­ nicians, psychologists, legal experts, and statisticians. The talks presented at the meeting were revised by the authors afterwards and have been rearranged by the editors to form a strictly organ­ 1 2 ized book. The two preceding meetings in 1978 and 1981 focused strongly on adjuvant therapy in primary breast cancer, but this top­ ic served merely as a nucleus in the third meeting. This meeting, although called the Third Heidelberg Symposium was forced to leave Heidelberg and in fact was held in Freiburg. Without the interest and enthusiasm of Professor Martin Schu­ macher and his colleagues in Freiburg the meeting would never have taken place. The meeting was generously supported again by the Federal Ministry of Research and Technology (Bundesministe­ rium flir Forschung und Technologie, BMFT) within the framework of the West German BMFT Breast Cancer Study Group. We are grateful, in particular, to Mr. Hans W. Herzog for his personal in­ volvement. Juni 1988 H. Scheurlen, R. Kay, M.