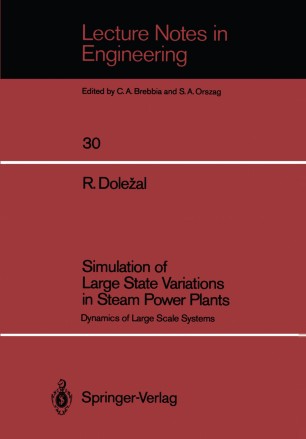 The present simulation method has been developed at the Institute for Power Technology and Steam Generation (IVD) of the University of Stuttgart. It is being successfully employed in the analysis of processes involving large state changes such as start-ups, shut­ downs, malfunctions and failures in steam power generating unit, which is a large scale system consisting of several subsystems with distributed parameters, to which the steam generator also belongs. This research resulted from the increasing use of the once-through boiler, while simultaneously raising the steam parameters into the region of the supercritical state, using sliding pressure operation, combined processes with gas and steam turbines etc. The objective of this system simulation is to reduce losses of heat and condensate and to minimise unavoidable thermal stresses. The project was financed between 1979 and 1983 by the German Research Society (DFG) as part of the special research section Nr. 157 'Thermal power plants'. The Westfalen Power Company Inc. (VEW) sponsored the start-up code 'DYSTAR'. We would like to express our thanks for this support. The following members of the IVD were involved in this research project: Dr.-Ing. J. Kley Dipl.-Ing. G. Riemenschneider Dr.-Ing. A. Rolf Dipl.-Ing. U. Mayer Dipl.-lng. E. Dr.-lng. M. Klug Pfleger Dr.-Ing. G. Berndt Presently it is intended to use this non-linear, time-variant model of a power generating unit with a variable process and system struc­ ture as the basis for simple code versions, which one can employ e.g.