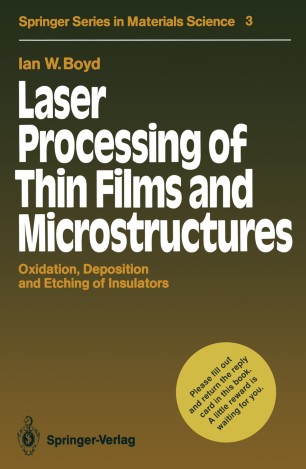 Oxidation, Deposition and Etching of Insulators

This text aims at providing a comprehensive and up to date treatment of the new and rapidly expanding field of laser pro­ cessing of thin films, particularly, though by no means exclu­ sively, of recent progress in the dielectrics area. The volume covers all the major aspects of laser processing technology in general, from the background and history to its many potential applications, and from the theory to the necessary experimental considerations. It highlights and compares the vast array of processing conditions now available with intense photon beams, as well as the properties of the films and microstructures pro­ duced. Separate chapters deal with the fundamentals of laser interactions with matter, and with experimental considerations. Detailed consideration is also given to film deposition, nuclea­ tion and growth, oxidation and annealing, as well as selective and localized. etching and ablation, not only in terms of the various photon-induced processes, but also with respect to traditional as well as other competing new technologies.