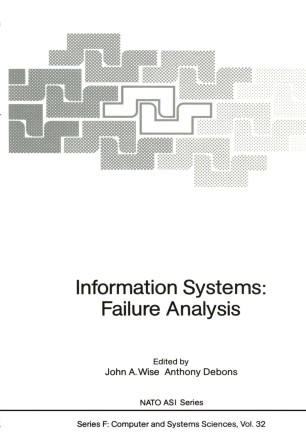 Although system analysis is a well established methodology, the specific application of such analysis to information systems is a relatively new endeavor. Indeed, it may be said to be still in the trial-and-error stage. In recent years, such analysis has been given impetus by the numerous accounts of information system failures, some of which have led to serious consequences -e.g., the accident at Three Mile Island, the chemical spills at Bophal, India, and at Institute, West Virginia, and the loss of the space shuttle Challenger. Analysis of the failure of the W. T. Grant Company, the third largest retail organization in the United States, indicated that improper use of the available information was a significant factor in that failure. In spite of these incidents and their widespread impact, only meager attempts have been made to develop an effective methodology for analyzing the information systems involved in such incidents. There have been no well developed guidelines for determining the causes of such events and for recommending solutions so that similar failures could be avoided. To address the need for such a methodology, the North Atlantic Treaty Organization (NATO) sponsored an Advanced Research Workshop attended by a group of 32 scientists, scholars, and expert investigators, representing a variety of disciplines and countries.