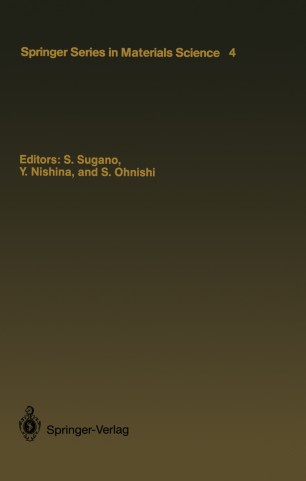 This volume contains the proceedings of the first in a series of biennial NEC Symposia on Fundamental Approaches to New Material Phases sponsored by the NEC Corporation, Tokyo, Japan. The symposium was held Octo­ ber 20-22, 1986, at Hakone Kanko Hotel in Hakone near Mt. Fuji, and on October 23 at NEC Laboratories in Kawasaki, Japan. About 40 partic­ ipants stayed together at the symposium sites during this period. They enjoyed intense and wide-ranging discussions in a conference room facing Mt. Fuji and the beautiful lake Ashinoko extending from the foot of the slope in the old crater. The title of the volume, Microclusters, means microscopic aggregates consisting of a few tens through a few hundreds of atoms. Microclusters, which are too big to be described as inorganic molecules but too small to have translational symmetry, are expected to show exotic properties which can be found in neither molecules nor solids. In the past few years the research field of microclusters has shown rapid and epoch-making de­ velopment. This is partly due to rapid development of the experimental techniques which have enabled the production of relatively dense, non­ interacting microclusters of various sizes in the form of cluster beams, thus allowing measurement of the properties of a free microcluster of a given size.