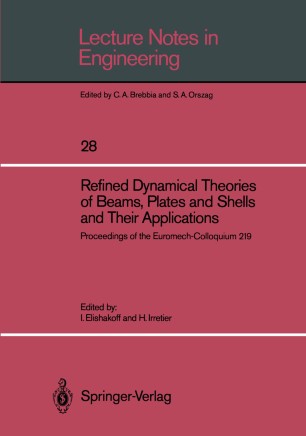 Refined Dynamical Theories of Beams, Plates and Shells and Their Applications

As is known, classical theories of vibration of the most fre­ quently encountered structural elements (e. g. , beams, plates and shells) disregard the effects of the shear deformation and rotary inertia. Refined theories, with these effects taken into account, have been pioneered by Bresse, Lord Rayleigh, Timoshenko, Eric Reissner, Mindlin and others. These refined theories have been fruitfully applied in recent decades in both theoretical and prac­ tical solid mechanics problems. The European Mechanics Committee approved holding EURO~illCH Colloquium 219 on "Refined Dynamical Theories of Beams, Plates and Shells and Their Applications" for reviewing the recent devel­ opments, providing guidelines for future investigations and presenting a forum for current work of younger researchers. The Colloquium was held during September 23 - 26, 1986, at the Uni­ versitat-Gesamthochschule Kassel, in the city of Kassel, Federal Republic of Germany. 45 Representatives of academia and industry, from nine European countries, as well as from Israel, USA and India participated in this Colloquium. IV 36 lectures were presented during the five sessions: Session A: Theory of Vibrations of Plates and Shells Session B: Various Approaches for Dynamical Problems of Beams Session C: Random Vibrations and Dynamic Stability Session D: Vibrations of Composite Structures Session E: Special Dynamical Problems of Beams, Plates and Shells The papers in this volums were divided into two parts: papers of invited keynote lectures and those of the invited contributed lectures.