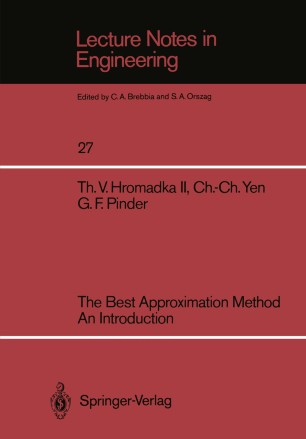 The Best Approximation Method An Introduction

The most commonly used numerical techniques in solving engineering and mathematical models are the Finite Element, Finite Difference, and Boundary Element Methods. As computer capabilities continue to impro':e in speed, memory size and access speed, and lower costs, the use of more accurate but computationally expensive numerical techniques will become attractive to the practicing engineer. This book presents an introduction to a new approximation method based on a generalized Fourier series expansion of a linear operator equation. Because many engineering problems such as the multi­ dimensional Laplace and Poisson equations, the diffusion equation, and many integral equations are linear operator equations, this new approximation technique will be of interest to practicing engineers. Because a generalized Fourier series is used to develop the approxi­ mator, a "best approximation" is achieved in the "least-squares" sense; hence the name, the Best Approximation Method. This book guides the reader through several mathematics topics which are pertinent to the development of the theory employed by the Best Approximation Method. Working spaces such as metric spaces and Banach spaces are explained in readable terms. Integration theory in the Lebesque sense is covered carefully. Because the generalized Fourier series utilizes Lebesque integration concepts, the integra­ tion theory is covered through the topic of converging sequences of functions with respect to measure, in the mean (Lp), almost uniformly IV and almost everywhere. Generalized Fourier theory and linear operator theory are treated in Chapters 3 and 4.