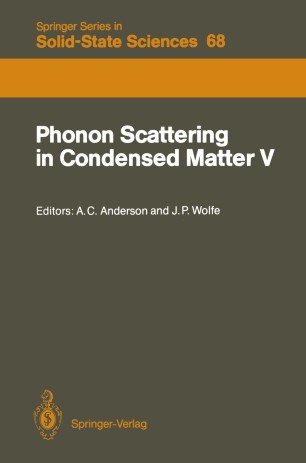 This volume contains the proceedings of the Fifth International Confer­ ence on Phonon Scattering in Condensed Matter held June 2-6, 1986 at the University of Illinois at Urbana-Champaign. The preceding confer­ ences were held at St. Maxime and Paris in 1972, at the University of Nottingham in 1975, at Brown University in 1979, and at the University of Stuttgart in 1983. The Illinois conference dealt with both traditional and newly developing topics in the area of phonon scattering. Papers were presented on phonon scattering in glassy and crystalline dielectrics, semi­ conductors, metals (both normal and superconducting), and in the areas of phonon imaging, large wave vector phonons, optical techniques and new experimental methods. The 12 invited papers and 100 contributed papers were presented by the 125 scientists from 14 countries. A citation was presented to Professor Paul Klemens of the University of Connecticut for his pioneering contributions to the physics of phonon scattering in solids. Paul Gustav Klemens Born - Vienna (1925) B. Sc. - Sydney (1946) D. Phil. - Oxford (1950) National Standards Lab. , Sydney (1950-1959) Westinghouse Research Labs. , Pittsburgh (1964-1969) Univ. of Connecticut (1967- ) Fellow: American Physical Society British Institute of Physics & Physical Society A long career dedicated to the understanding of thermal transport. Few papers are published on phonon thermal transport that do not reference his work.