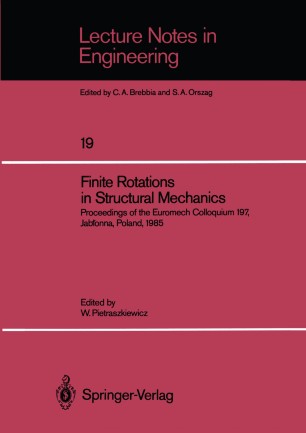 The deformation near a material particle of the classical continuum is produced by successive superposition of a rigid-body translation, a pure stretch along principal directions of strain and a rigid-body ro­ tation of those directions. The rotational part of deformation is par­ ticularly important in the non-linear analysis of thin-walled solid structures such as ~eams, thin-walled bars, plates and shells, since in this case finite rotations may appear even if the strains are infinite­ simal. It seems that the research concerning the application of finite ro­ tations is carried out independently in different fields of structural mechanics. Theoretical and numerical methods developed and the results obtained for a particular type of the structure or for a particular ma­ terial behaviour not always are used to analyse similar problems for other types of structures or for another material behaviour. Since the research in this field had been growing rapidly, it was decided to organize an informal international meeting, under the auspi­ ces of the European Mechanics Co~mittee, entitled: Euromech Colloquium 197 "Finite Rotations in Structural Mechanics". The meeting was held on 17 - 20 September 1985 in Jablonna, a small suburbian area of Warsaw.