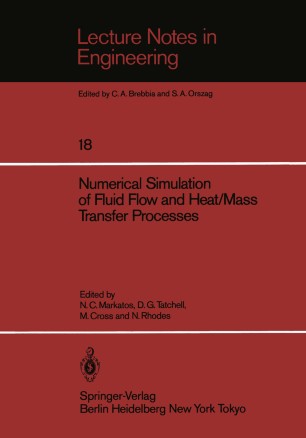 Computational fluid flow is not an easy subject. Not only is the mathematical representation of physico-chemical hydrodynamics complex, but the accurate numerical solution of the resulting equations has challenged many numerate scientists and engineers over the past two decades. The modelling of physical phenomena and testing of new numerical schemes has been aided in the last 10 years or so by a number of basic fluid flow programs (MAC, TEACH, 2-E-FIX, GENMIX, etc). However, in 1981 a program (perhaps more precisely, a software product) called PHOENICS was released that was then (and still remains) arguably, the most powerful computational tool in the whole area of endeavour surrounding fluid dynamics. The aim of PHOENICS is to provide a framework for the modelling of complex processes involving fluid flow, heat transfer and chemical reactions. PHOENICS has now been is use for four years by a wide range of users across the world. It was thus perceived as useful to provide a forum for PHOENICS users to share their experiences in trying to address a wide range of problems. So it was that the First International PHOENICS Users Conference was conceived and planned for September 1985. The location, at the Dartford Campus of Thames Polytechnic, in the event, proved to be an ideal site, encouraging substantial interaction between the participants.