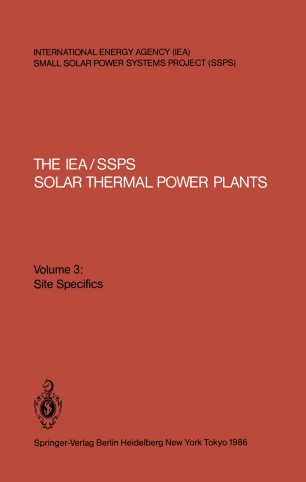 The Project's origin As a consequence of the so-called "first oil crisis", the interest in solar electricity generation rose sharply after 1973. The solar ther­ mal way of solving the problem was attractive because the main task was simply to replace the fossil fuel by a "solar fuel" in an other­ wise conventional thermal power plant -that was at least what many thought at that time. Thus more than half a dozen of solar thermal plant projects were created in the mid-seventies. One of them is the Small Solar Power Systems (SSPS) Project of the International Energy Agency (lEA). It consists of the design, development, construction, operation, test and evaluation of two dissimilar small solar thermal electric power systems each at a nominal power of 500 kW . e ITET and TOAB In order to assist the Operating Agent (DFVLR - Deutsche Forschungs­ und Versuchsanstalt fUr Luft- und Raumfahrt e. V. ) in managing the project, the Executive Committee (EC) created two bodies called the "International Test and Evaluation Team" (ITET) and the "Test and Operation Advisory Board" (TOAB). The latter consisted of a group of experts from the different participating countries, meeting three to four times a year to articulate i. a. the technical interests and expectations of the different parties in the project. It was the TOAB that formulated e. g.