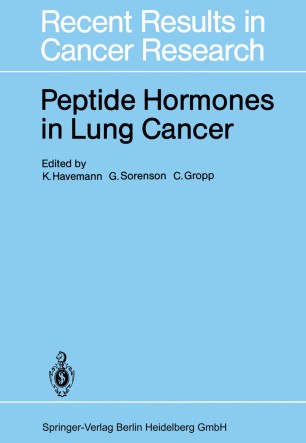 The incidence of lung cancer has reached epidemic proportions throughout the civilized world. One indication of the dimensions of this problem is that in the United States lung cancer has become the leading cause of cancer death in women as well as men. In 1912 there was a "nearly complete consensus of opinion that primary malignant neoplasms of the lung (were one) of the rarest forms of disease," according to Adler. By 1937, however, it had become clear that the incidence of lung cancer was increasing significantly; this increase has been progressive ever since. It is now well known that some lung cancers give rise to a variety of hormones which, at times, produce clinical manifestations. The association of hormone production with a "nonendocrine" tumor raises many questions, the answers to which may shed some light on the etiology of this prevalent form of cancer. This fascinating prob­ lem has stimulated a wide variety of studies in both the clinical and the basic sciences. A number of the more recent studies in this field were discussed at the International Symposium on Peptide Hor­ mones and Lung Cancer held in Marburg, West Germany, on June 18-20, 1984. This volume contains the papers that were pre­ sented on this occasion.