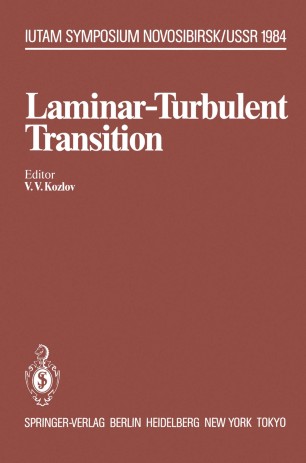 At the suggestion of the USSR National Committee of Theo­ retical and Applied Mechanios the International Union of Theo­ retical and Applied Meohanics made a deoision to organize the Second IUTAM Symposium on Laminar-Turbulent Transition in No­ vosibirsk. Professor Yanenko was entrusted to be the chairman of the scientific committee. It was proposed that about 100 scientists would participate in the Symposium and that 60 lectures and invited lectures would be delivered; as for the theme of the Symposium, it was devoted to experimental and theoretical stu­ dies of laminar-turbulent transition in fluids and gases, i.e. the physical problems of transition and mathematical modeling in shear flows. It was planned to lay a special emphasis on fundamental mechanisms of the transition process. The scienti­ fio committee approved of the scope of the Symposium having considered the changes in the directions of the stUdies which took place since the First Symposium. For example, there was singled out the problem of transformation of external distur­ bances into eigenoscillations of shear flows, i.e. the recep­ tivity problem which was only slightly touched upon at the First Symposium. A new section appeared devoted to the inter­ relation of the flow separation phenomenon and its stability. It was planned to focus the attention on the secondary instability at transition to turbulence at the non-linear stage of the flow breakdown as well as on the loss of stability and the disturbances development in 3-D flows.