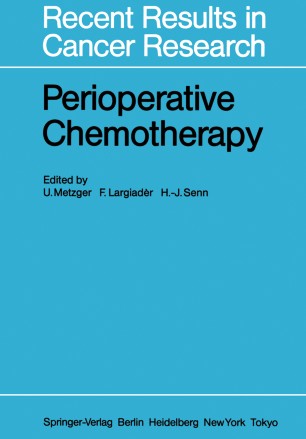 One reason for failure to cure solid tumors by surgery appears to be the impossibility of controlling metastases that are present but latent at the time of operation. This failure is a common clinical experience with aggressive neoplasms. but it is not always appreciated in tumors with longer survival times. e. g .• breast and colon cancer. In addition. recent evidence indicates that after resection of a primary tumor micrometas­ tases from it might be enhanced by suppression of immune and reticu­ loendothelial functions of the host. Other factors, such as increase of coagulability and stress in the perioperative period, can also promote tumor growth. The development of new metastases might be facilitated by cells forced into the circulation during operative manipulations. Such events could be important for the outcome of treatment and it is suggested that preventive measures should be directed to this systemic component of solid tumors. Radical surgery can reduce the number of tumor cells to a subclinical 3 6 stage (10 to 10 cells) in which chemotherapy might be more effective than in advanced stages. Chemotherapy, on the other hand, might aggravate the surgical morbidity by influencing the wound healing pro­ cess, by decreasing the immune response, and/or by toxicity to the bone marrow and to the gastrointestinal tract, for example.