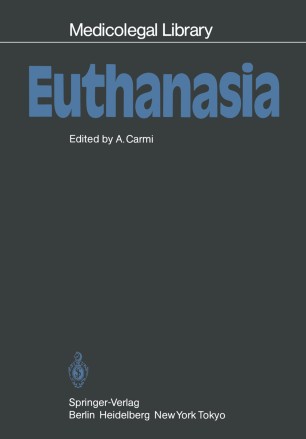 The Medicolegal Library is the first and only series of its kind. Its importance is self-evident. During the last decade, science, especial­ ly medical practice, has become an increasingly complex under­ taking. Recent dramatic developments in medicine have given rise to both theoretical controversies and practical dilemmas. Society is struggling with new scientific, economic, cultural, and legal issues. The establishment of a series such as this appears vital for lawyers and physicians, for sociologists and psychologists, and for the pub­ lic at large. The editorial board of the Medicolegal Library consists of dis­ tinguished scientists from many different countries and disciplines. Judge Amnon Carmi acts as principal series editor. Judge Carmi is the author of many books and articles on medical law, and is Editor­ in-Chief of Medicine and Law: An International Journal. The Medicolegal Library will issue two books each year. The first four books, soon to be published, will deal with child abuse, euthanasia, disability, and nursing, laws and ethics. It is the wish and intention of Springer-Verlag that the Medicole­ gal Library play an important role throughout the world in the study and understanding of the field of medicine and law, for the benefit of both professions and of mankind at large. Contents I. Introduction Live Like a King: Die Like a King A.Carmi .............. . 3 II. The Duty to Live and the Right to Die On the Dichotomy of Divinity and Humanity in Jewish Law H. H. Cohn . . . . . . . . . . . . . . . . . . . . .. . . 31 . . . .