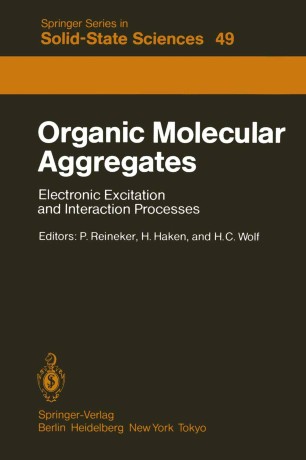 This volume contains the talks presented at the International Symposium on Electronic Excitations and Interaction Processes in Organic Molecular Aggre­ gates which was held at Schloss Elmau, Bavaria, Germany from June 5 to June 10, 1983. In the recent years the investigation of organic materials has developed rapidly and has led to the construction of materials with interesting proper­ ties. The discovery of highly conducting and superconducting organic materials is definitely one of the reasons for the enormous increase in research acti­ vity in this field. Interesting applications have been realized or seem pos­ sible, such as the application of organic materials in electrophotography. The conductivity of organic polymers may be varied within a large range by doping and such materials have been used to construct an organic battery. Some time ago it was suggested that organic glasses and polymers could be used as stor­ age materials in computer technology. With the development of preparation tech­ niques and modern methods of investigation, for example, high resolution and picosecond spectroscopy, a large amount of experimental data is available not only for the conducting materials but also for organic semiconductors and in­ sulators. With this rapid accumulation of experimental material the microscopic theoretical understanding could not keep pace.