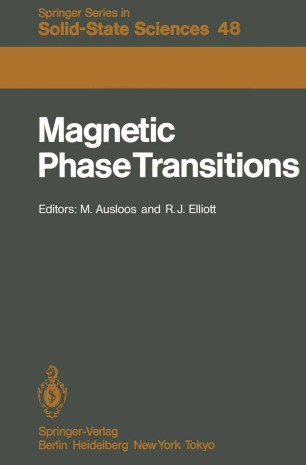 Proceedings of a Summer School at the Ettore Majorana Centre, Erice, Italy, 1–15 July, 1983

The present volume contains the courses given at a Summer School on "Magne­ tic Phase Transitions" held at the Ettore Majorana Centre for Scientific Culture, at Erice (Trapani), Italy in July 1983 under the auspices of the Condensed Matter Division of the European Physical Society in their series on Materials Science and Technology. The student participants came from West Germany, Great Britain, Brazil, Greece, Switzerland, Sweden, Italy, USA and The Netherlands. The lecturers came from various European countries, Israel, USA and Canada. The atmosphere at the meeting was excellent and a good spirit of companion­ ship developed during two weeks of working together. The spread of interests among the lecturers and students was divers;jfied but balanced. The main lec­ turing contributions are reported in this volume. They represent up-to-date reviews in a pedagogical style. In addition, informal presentations on cur­ rent research interests were made which have not been included. The school attempted to summarize the current position on the properties of magnetic phase transitions from several points of view. The range and scope of the­ oretical techniques, and of particular aspects of materials or phenomena as observed experimentally were very well put forward by the lecturers. The grouping of manuscripts in chapters does not represent, however, the sched­ ule followed during the school. Contributions on mean-field approximations and renormalization-group methods either for static or dynamic phenomena can be found at various places in the following sections.