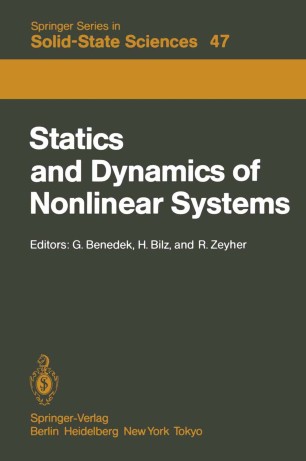 Statics and Dynamics of Nonlinear Systems

Proceedings of a Workshop at the Ettore Majorana Centre, Erice, Italy, 1–11 July, 1983

The investigation of the properties of nonlinear systems is one of the fast deve­ loping areas of physics. In condensed matter physics this 'terra incognita' is approached from various starting points such as phase transitions and renormali­ zation group theory, nonlinear models, statistical mechanics and others. The study of the mutual interrelations of these disciplines is important in developing uni­ fying methods and models towards a better understanding of nonlinear systems. The present book collects the lectures and seminars delivered at the workshop on "Statics and Dynamics of Nonlinear Systems" held at the Centre for SCientific Culture "Ettore Majorana·" in Erice;· Italy, July 1 to 11, 1983, in the framework of the International School of Materials Science and Technology. Experts and young researchers came together to discuss nonlinear phenomena in condensed matter physics. The book is divided into five parts, each part containing a few general artic­ les introducing the subject, followed by related specialized papers. The first part deals with basic properties of nonlinear systems including an introduction to the general theoretical methods. Contrfbutions to the nonlinear aspects of phase transitions are collected in the second part. In the third part properties of incommensurate systems are discussed. Here, competing interactions lead to charge-density waves, soliton lattices and other complex structures. Another point of special interest, illustrated in the fourth part, is the 'chaotic' be­ havior of various systems such as Josephson junctions and discrete lattices.