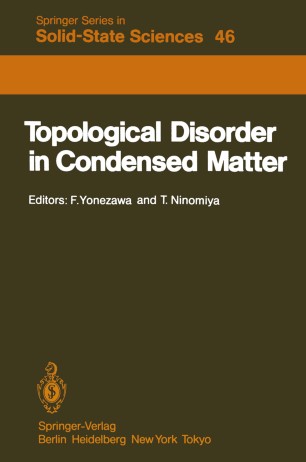 This volume contains papers presented at the Fifth Taniguchi Symposium on the Theory of Condensed Matter, which was held between 2-5 November, 1982, at Shimoda, Japan. The topic of the Symposium was "Topological Disorder in Condensed Matter. " The objective of the Taniguchi Symposium is to encourage activity in those fields of research not in the limelight at the moment but regarded as very promising, such as our theme. Topological disorder refers to the dis­ order in the positions and connectivities of atoms in amorphous solids and liquids. The development of the physiCS of topologically disorderd systems, though extremely important fundamentally and for application purposes, falls far behind compared to that of other kinds of disorderd systems because the structure characterization of topologically disordered systems is still at a rather primitive stage. The structure characterization is the key to com­ prehensive understanding of physical properties of any material. Recently, several new attempts at structural analyses have been reported. Encouraged by this fact, our motivation in organizing the symposium was to investigate the possibilities of theoretical approaches to open a breakthrough in the present research situation on this subject. A rough sketch of the problem is made in the Introduction to give the readers a general outline of the subject. Part I is devoted to several at­ tempts to synthesize and characterize topological disorder more or less by analytical means.