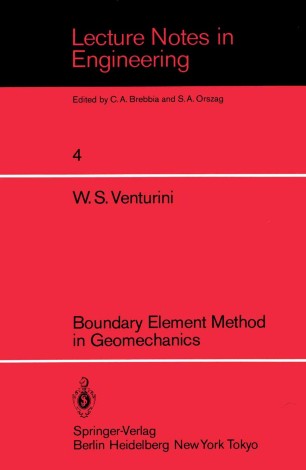 Numerical techniques for solving many problems in continuum mechanics have experienced a tremendous growth in the last twenty years due to the development of large high speed computers. In particular, geomechanical stress analysis can now be modelled within a more realistic context. In spite of the fact that many applications in geomechanics are still being carried out applying linear theories, soil and rock materials have been demonstrated experimentally to be physically nonlinear. Soils do not recover their initial state after removal of temporary loads and rock does not deform in proportion to the loads applied. The search for a unified theory to model the real response of these materials is impossible due to the complexities involved in each case. Realistic solutions in geomechanical analysis must be provided by considering that material properties vary from point to point, in addition to other significant features such as non-homogeneous media, in situ stress condition, type of loading, time effects and discontinuities. A possible alternative to tackle such a problem is to inttoduce some simplified assumptions which at least can provide an approximate solution in each case. The validity or accuracy of the final solution obtained is always dependent upon the approach adopted. As a consequence, the choice of a reliable theory for each particular problem is another difficult decision which should be 2 taken by the analyst in geomechanical stress analysis.