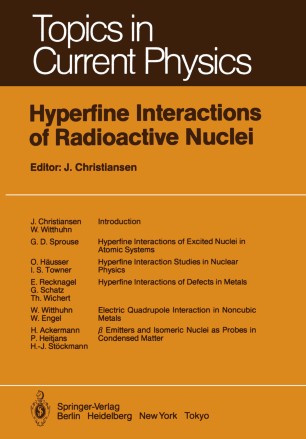 This volume deals with the interaction between moments of excited or radioactive nuclei and electromagnetic fields. The experimental techniques developed for the observation of this hyperfine interaction are governed by the lifetime of the nuc­ lear states in question. The dynamics of the interaction are reflected by the time dependence of the spatial distribution of the radioactive decay radiation. Basically, the experiments yield information on the energy shifts and/or splittings of the nuc­ lear levels. These quantities are determined essentially by the product of the nuc­ lear moment and the electromagnetic field acting at the site of the nucleus. Due to the strong decrease in the fields with distance, the measurements probe these fields within a highly localized region centered around the radioactive nuclei. Detailed experimental methods with numerous ramifications were developed in the early sixties. In the period which followed, the main emphasis was on excitation of short-lived nuclear states by means of pulsed particle accelerators, implantation of radioactive nuclei, and production of polarized a-unstable nuclei by nuclear re­ actions with polarized neutrons or particles. The seventies were a period of fruit­ ful applications directed to extensive studies of the moments of excited nuclear states on the one hand, and local internal fields on the other, resulting in far­ reaching information on atomic and solid-state properties. The organization of this Topics volume follows these main lines of research.