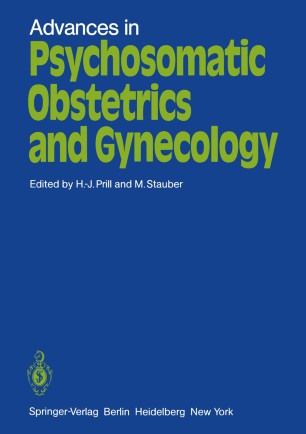 Advances in Psychosomatic Obstetrics and Gynecology

The Sixth International Congress of Psychosomatic Obstetrics and Gynecology, which took place from 2 to 6 September 1980 in the congressional chambers of the former Reichstag building in Berlin, had as its theme "Women in a Changing Society." Partic­ ular emphasis was placed on the fact that in illness, as well as in good health, women must be considered in a comprehensive psychosocial context. Observations from medi­ cal, psychological, sociological, and anthropological perspectives on the healthy and sick woman through the various stages of her life presented a wide spectrum of scien­ tific research. Sessions covering such fundamental topics as the problems of the young mother, women in the postgenerative phase, and the early mother-child relationship were enriched by many recent scientific contributions. Further subjects, ranging from the dialogue in the gynecologist's consulting room through the emotional situation of the gynecologist, body language in female sexuality, and sexual disorders experienced by gynecological patients to psychosomatics and cancer, were pursued in small workshops. Of particular psychoendocrinological interest were the contributions on obesity and the premenstrual syndrome. The results of this workshop and another on unwanted pregnancy have ap­ peared recently in separate monographs.